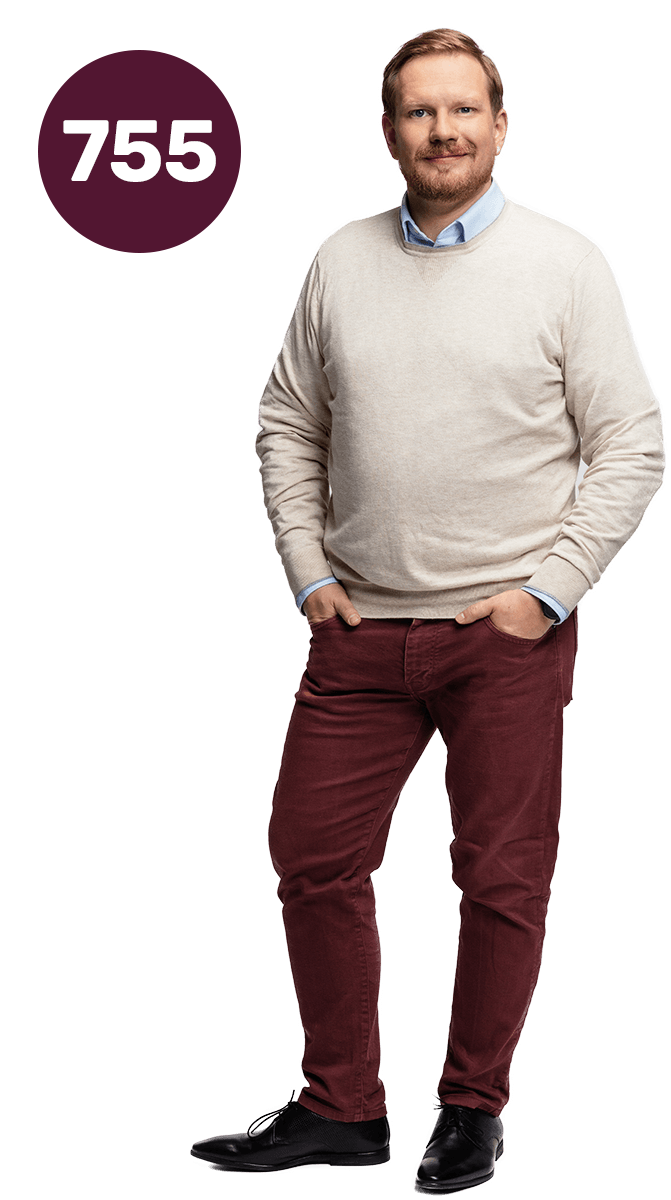 Ted is running for city council in Helsinki 2021.

My name is Ted Urho, I work as an executive manager for the liberal think tank Agenda and live in Ullanlinna (Ulrikasborg) with my partner Mathias.

I was born in Helsinki (Helsingfors), grew up in Espoo (Esbo) and since 2010 I’ve lived permanently in Helsinki. In between, I managed to live both in Vaasa (Vasa) (studies) and in Togo, West Africa (exchange).

I’m a lifelong liberal and I care deeply about human rights, the freedom of the individual and the notion that everyone should have equal chances to make the life they want for themselves.

Before working for Agenda, I spent ten years as a journalist at Yleisradio (The Finnish public service company). First as a radio talk show host and producer at the youth channel Yle X3M and then for five years as the host of the breakfast show on Yle Vega in the Helsinki region. Through that job, I came in daily contact with locals and expats in Helsinki and their problems, joys, and thoughts.

What I work for

A city for everyone

Helsinki has always been a cosmopolitan city and should continue to be so in the future. To achieve this, we must have zero tolerance for racist attacks, sexual harassment, and abusive language in the public space. Our everyday life is both physical and digital, and all residents should feel safe in both.

It is important that all residents in the city can feel well, both physically and mentally. Unfortunately, this is not always the case, as many people struggle to find their place in life.
Therefore, it is important that we create an economic climate that promotes entrepreneurship, creates more jobs, and gives the individual the opportunity to succeed in life.

Helsinki is a vibrant city that is growing, which is a good thing. Our capital should accommodate anyone who wants to come here. With an ever-growing city, there will also be growth pains. These should be minimised by not unnecessarily tearing up sidewalks and streets for construction work, projects should be coordinated so that they run smoothly and cost-effectively, and we should also continue to simplify bureaucracy for restaurant owners, entrepreneurs, and service providers so that Helsinki becomes an even more attractive city for people to start a business.

The city centre should be an attractive and welcoming place for all the city’s residents and visitors. Movability is an important part of city life, and the city should strive to make it as easy as possible for citizens to move smoothly between the different parts of the city, regardless of whether you choose to go by car, bicycle, or bus. Public transport is an important part of the city, and I believe that HRT (the regional transit authority) should reintroduce the so-called tram ticket, which was abolished a couple of years ago in connection with the zoning reform.

I am a motorist, cyclist, and a pedestrian. In an increasingly individualized society, it is important that we pay attention to each other, and treat each other well in traffic. I am in favour of moving traffic underground, creating clearer bike paths and increasing the number of car-free zones in the city centre.

Especially in areas close to schools and areas popular among families, it is important that traffic runs smoothly, but above all safely.

A minority cannot survive without the benevolence and support of the majority. Just like our our country, I am bilingual. Trilingual in fact, as I did my senior secondary education in English via the International Baccalaureate.

There are over a 100 000 people in Helsinki who speak another language than Finnish or Swedish as their first language. It is important that the city accommodates and can provide service in as many of these languages as possible, within reason. When it comes to dealing with the city, non-Finnish and non-Swedish speakers should be provided the possibility to use English as their language of business.

Having said this, I must admit that I’m concerned about English pushing out Finnish and Swedish in the public space. I believe that all three languages can cohabit in our city.

The key to this is of course education. We must continue to maintain and develop our great Finnish educational system and the schools in Helsinki.

Do you want to help Ted get elected? 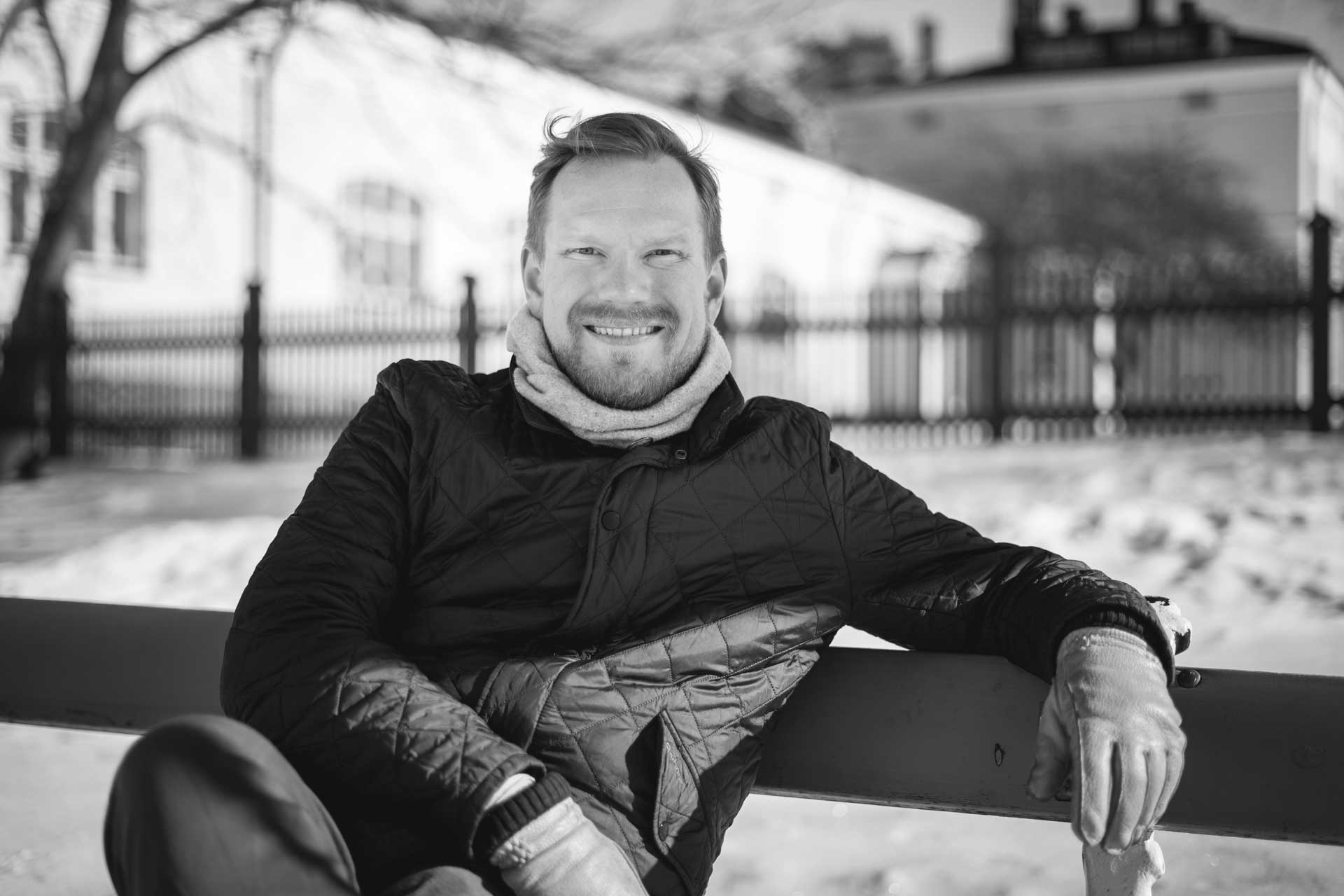 Take a break with Ted

I’d love to sit down for a moment and talk about our city with you. Here you can book an online coffee break with me. 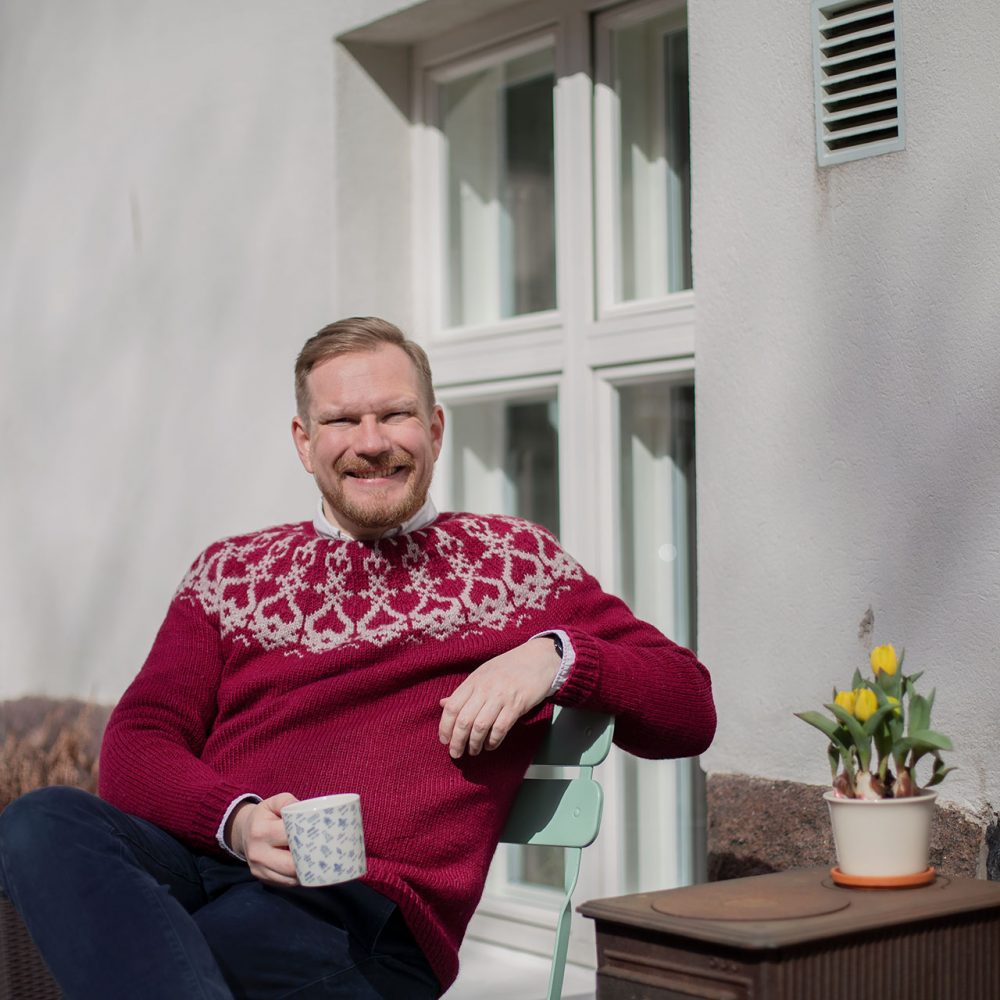 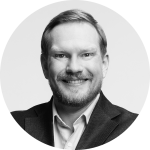 My values ​​are liberal and I value human rights, the freedom of the individual and the idea that everyone should have equal chances to fulfil themselves as they wish. 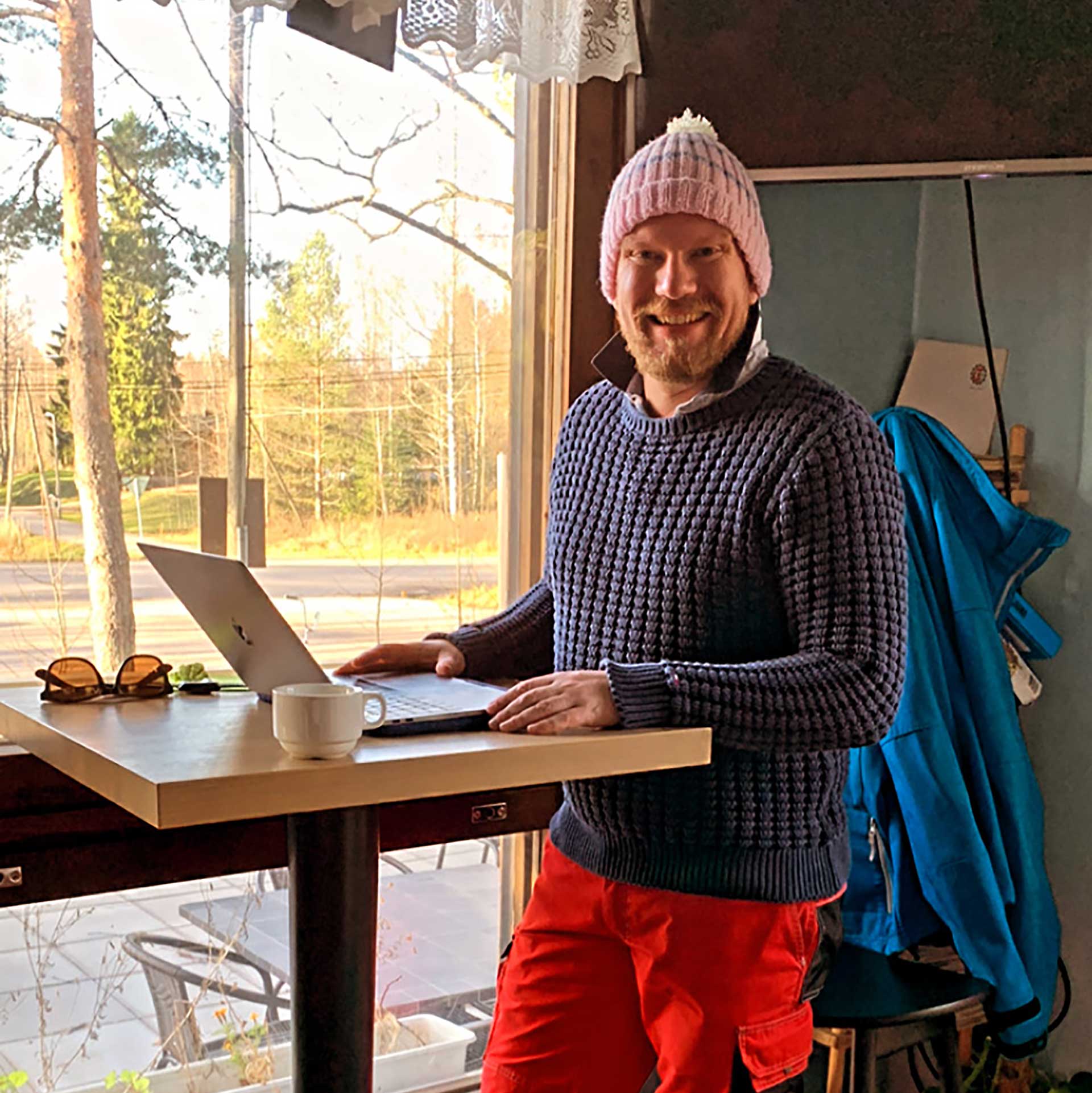 That is why I am standing in the election

I have always been interested in politics and social issues. As an eight-year-old, I sat in the school library and read with horror about the apartheid regime in South Africa. During high school, I became involved in the student union, Finnish International Baccalaureate Society and the youth organisation of SFP. This engagement in common affairs continued throughout my university education.

At the same time as my friends and contemporaries began running for public office, I embarked on a different path and became a journalist. During my ten years at YLE I got to meet a lot of interesting people, report on current affairs and interview elected representatives. But I missed being able to express an opinion myself.

Now, a couple of years after I finished my journalistic tenure, it’s time to run in my first ever election. I hope you want to support me, and give me your vote. 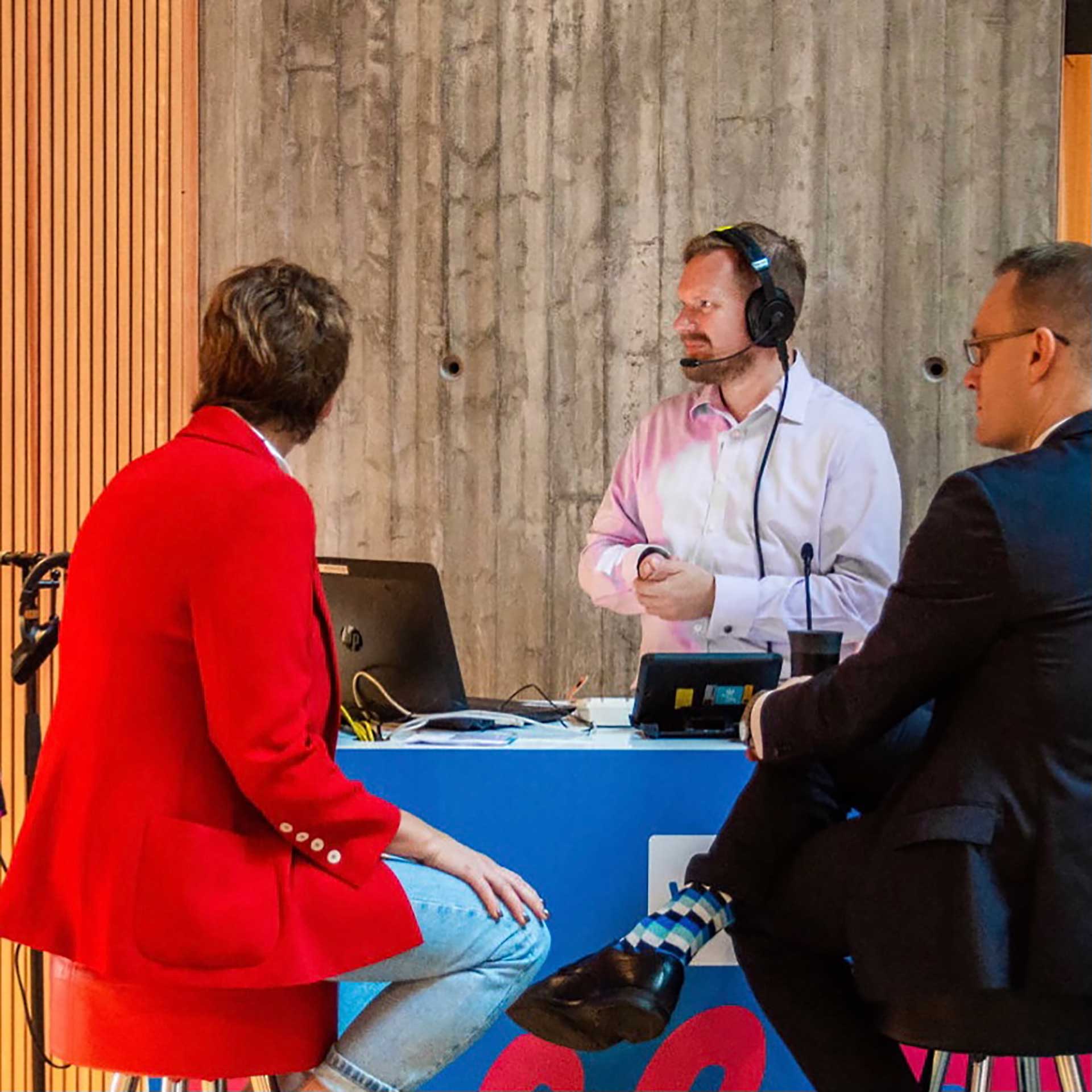 Do you want to help Ted get elected?